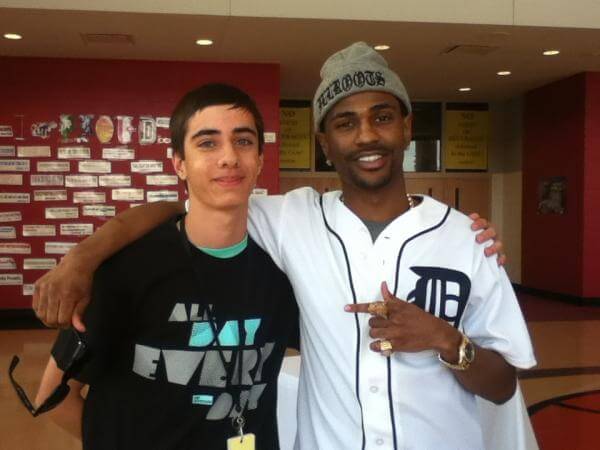 On Thursday, June 12 from 9 until 11 a.m., recording artist and Detroit native, Big Sean will return to his hometown to act as “Principal for the Day” at Bates Academy (Bates), an Excellent Schools Detroit “Top K-8 Recommended School.” Competing against thousands of students from 37 Detroit Public Schools’ (DPS) middle and high schools, Bates won the Get Schooled Detroit Attendance Challenge this spring. More than half of all participating schools posted attendance increases during the challenge. Joining the Bates students will be eighth graders from Durfee Elementary-Middle School (Durfee), who saw their attendance jump a district high of 11 percent through their participation in the Challenge. Shade 45 radio host Sway will serve as host and emcee of the day’s events along with local radio personality, DJ Fingers, of FM 98 WJLB.In an effort to combat chronic absenteeism across the district, DPS partnered with Get Schooled and its founding partner, Viacom, through the company’s Viacommunity social responsibility umbrella, to offer the Detroit Attendance Challenge in support of the district’s “On Time. All Day. Every Day.” Caign. The Attendance Caign falls under the district’s five-year Strategic Plan to initiate new methods to better serve the needs of students and families. The district implemented a new Attendance Policy in the fall of 2013 to provide a standardized and consistent district-wide policy for better enforcement and increase accountability among students, parents, staff and support agencies.The Get Schooled Attendance Challenge launched in September and ran through the school year. To participate and compete for points and prizes, schools encouraged their students to show up for school every day and check-in to school daily on GetSchooled.com.”The correlation between success in life and daily attendance in school is inarguable,” said Big Sean. “As a former DPS student, I could not be more proud of the district for taking the issue of attendance seriously, and of Bates Academy for its awesome achievement. I’m excited to have the chance to celebrate the students’ commitment to showing up for school, all day, every day.”In recognition of the role youth leadership played in affecting change on school cuses during the Challenge, Get Schooled and Viacom have founded the Get Schooled Student Leadership Corps in partnership with Detroit-based nonprofit, the Coleman A. Young Foundation (CAYF). At the recommendation of The Skillman Foundation, Get Schooled tapped the longstanding CAYF to serve as the implementation partner for the new initiative. As principal for the day, Big Sean will help launch the Corps’ inaugural class of 30 students from across DPS. He will join Sway, Mike Grams, metro Detroit native and Chief Operating Officer of Taco Bell, and Get Schooled Executive Director, Marie Groark, along with senior leadership from DPS in a conversation about leadership with the inaugural class of the Get Schooled Leadership Corps.”Detroit students have been working hard all year to boost their attendance,” said Marie Groark, Executive Director of Get Schooled. “We are excited Big Sean is able to recognize their hard work and determination, and even more thrilled that he will be able to join us for the announcement of our first-ever student leadership corps, right here in Detroit.”Big Sean attended the Detroit Waldorf School, a school of art, from kindergarten to eighth grade. He later attended and graduated from Cass Technical High School. The chart-topping artist was first signed to Kanye West’s music label GOOD in 2007 and then to Island Def Jam in 2008. Following the release of the trilogy of mixtapes for which he was initially recognized, Def Jam dropped the artist’s hit album, Finally Famous in July of 2011, followed by the award-winning mixtape Detroit in September 2012 and Hall of Fame, which debuted at number three in the Billboard 200, in August of 2013.The Challenge, which is made possible by a partnership between Get Schooled, Viacom and DPS, took place over three rounds of competition this spring. More than half of all DPS middle and high schools were active and engaged in the caign by checking into school every day on the Get Schooled website, and participating in online discussions about school involvement, career aspirations and study tips. The final round of the competition included the prize of a visit from Big Sean.”I am beyond pleased by the hard work and dedication our students have demonstrated throughout the course of this caign,” said Dr. Cleo M. Moody, principal at Bates Academy. “Get Schooled has done a remarkable job of making the very important issue of attendance relevant to students by connecting it to popular culture. Seeing our kids come together in pursuit of a common goal that resulted in improved attendance and an increased level of engagement, was truly rewarding.”Schools involved in the Get Schooled Detroit Attendance Challenge included: Detroit International Academy, Durfee Elementary-Middle School, Sson-Webber leadership Academy, Martin Luther King, Jr. Senior High School, Foreign Language Immersion & Cultural Studies School, Gompers Elementary-Middle School, Randolph Career and Technical Center, A.L. Holmes Elementary-Middle School, Burton International Academy, Communication and Media Arts High School, Detroit Collegiate Prep at Northwestern, East English Village Preparatory Academy, Clippert Academy, Dixon Educational Learning Academy, Fisher Magnet Upper Academy, Golightly Education Center & Early Learning Neighborhood Center, Ann Arbor Trail Magnet Elementary-Middle School, Cass Technical High School, Catherine C. Blackwell Institute, Jerry L. White Center High School, Medicine and Community Health Academy at Cody, Osborn Academy of Mathematics, Science and Technology, Renaissance High School, Academy of the Americas, Amelia Earhart Elementary-Middle School, Carver S.T.E.M. Academy, Clark Preparatory Academy, Cody Academy of Public Leadership, Duke Ellington Conservatory of Music & Art at Beckham Academy, Golightly Career and Technical Center, Henderson Academy, Noble Elementary-Middle School, Paul Robeson, Malcolm X African Centered Academy, Priest Elementary-Middle School, Pulaski Elementary-Middle School and West Side Academy Alt. Ed.