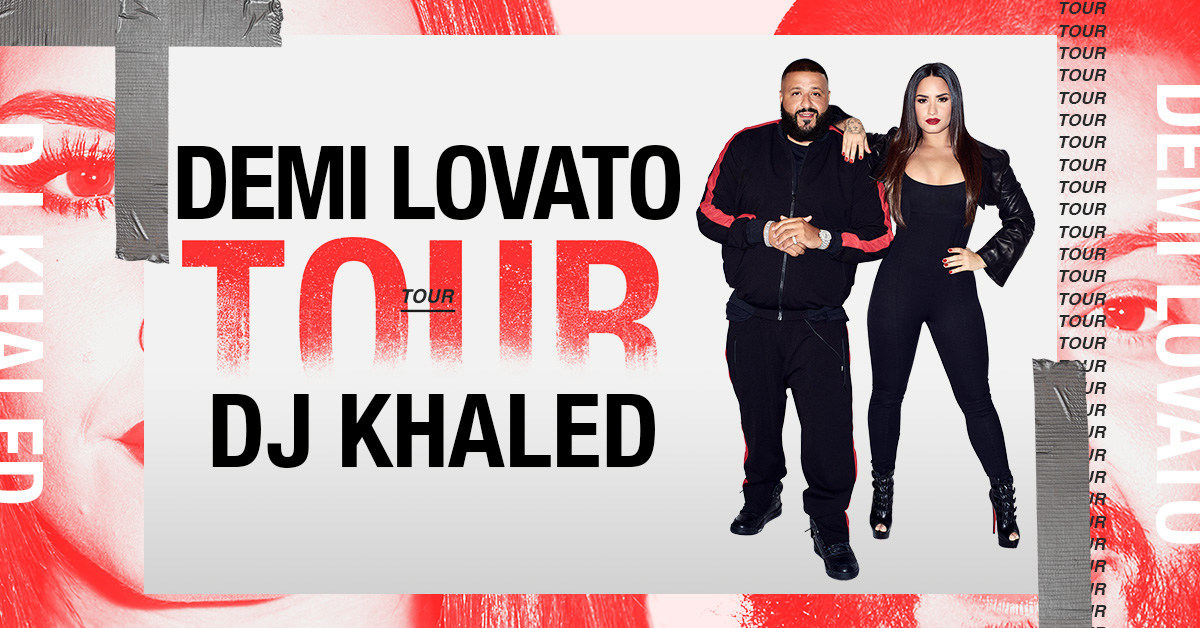 Grammy®-nominated, multi-platinum singer and songwriter Demi Lovato today announces her North American tour, with special guest multi-platinum, hip-hop icon DJ Khaled. Produced by Live Nation, the 20-city run kicks off February 26 in San Diego, CA and wraps March 31 in Tampa, FL.Complete tour routing can be found below.The announce comes off the recent release of Lovato’s critically acclaimed album TELL ME YOU LOVE ME, featuring the RIAA platinum Top 40 #1 smash “Sorry Not Sorry,” DJ Khaled, the GRAMMY® nominated, multi-platinum artist, producer, entrepreneur, and author, had his tenth and most recent full-length album GRATEFUL [We The Best Music Group/Epic Records] hit #1 on the Billboard Top 200 chart. It was certified RIAA Platinum with 1.1 billion streams of the album to date.Citi® is the official presale credit card for the Demi Lovato tour. As such, Citi® cardmembers will have access to purchase U.S. presale tickets beginning Monday, October 30 at 10am local time until Thursday, November 2 at 10pm local time through Citi’s Private Pass® program. For complete presale details visit https://www.citiprivatepass.com/.To ensure fans gain access to tickets, Fan Registration for the U.S. and Canadian tour dates will be available here through Ticketmaster’s Verified Fan program. Additionally, The Ellen DeGeneres Show and Fabletics presales begin October 31. JBL and Ulta presales follow on November 1 along with a YouTube presale on November 2.Tickets for the Demi Lovato tour go on-sale to the general public beginning November 3 at 10am local time at LiveNation.com.www.demixkhaled.comDEMI LOVATO 2018 TOUR WITH SPECIAL GUEST DJ KHALED

TELL ME YOU LOVE ME exploded to a #1 debut on the iTunes album chart in the U.S. and 36 territories around the world on the strength of “Sorry Not Sorry,” one of the fastest-rising hits in Demi’s career. Showcasing “one of the year’s most unstoppable voices” (Entertainment Weekly), the track has logged over 350 million global streams, and over 200 million views for its unbridled house party video. Underscoring TELL ME YOU LOVE ME‘s pop soulful flair, “Sorry Not Sorry” is joined in the Top 10 at Pop radio by “No Promises,” Demi’s collaboration with Cheat Codes.Demi performed “Sorry Not Sorry” on NBC’s The Tonight Show starring Jimmy Fallon, ABC’s Good Morning America, and the MTV VMAs. She followed up with release week appearances in support of TELL ME YOU LOVE ME on NBC Universal’s Ellen, The Today Show, and MTV’s TRL. On Ellen, Demi introduced her full-length official new documentary, Simply Complicated. The 78-minute film amassed more than 7 million views in the first week of release.TELL ME YOU LOVE ME is Demi‘s first new album since 2015’s Confident, the inaugural release on the Island/Safehouse/Hollywood label, featuring the massive global hit “Cool For the Summer,” with over 290 million YouTube views to date. Rolling Stone described Confident as “the album she was born to make: a brassy, sleek, dynamic pop production that lets her powerful voice soar to new emotional highs.” Her previous album, 2013’s self-titled Demi, hit #1 on iTunes in over 50 countries worldwide.Demi will join the lineup for the 2017 MTV EMAs extravaganza, live from London’sSSE Arena in Wembley on November 12. Demi Lovato is one of the most influential names on social media, with an engaged combined following of over 145 million.