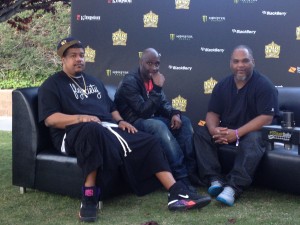 Hip Hop is still quite young as far as being a genre of music but the group De La Soul would be considered veterans with over 20 years in the game. From the group’s inception in 1987, Posdnous, Dave, and Maseo have been consistently one of hip hop music‘s refreshing sources of quality music. They don’t get radio spins like that used to with hits such as “Me Myself and I” but they still tour and make good music. This past weekend, they rocked Guerrilla Union’s “Paid Dues” Festival along with artists like Kendrick Lamar, Trinidad James, Juicy J, Macklemore & Ryan Lewis and a host of others. We had the chance to catch up with them as they reflected on 20 plus years representing for hip-hop and what it means to have longevity. They also discussed being considered “legends” by some but not stars.Dave: “We always treated music like an art form and we just love doing music. We create music even when we don’t have an album to get out. We honestly do it for the love and have fun doing it. That is probably why we have longevity.Pos: “We take our time with it and really go through a process of trying to create new and innovative music each time we come out. We are just 3 guys that love doing what we do and I guess people connect with that which allows us to still tour and make music that people seem to appreciate.Mase0: “Again, we just try to make quality music because we love it. Some people call us legends and that is cool but at the end of the day we just like to make music. We are 3 regular guys that hang out on the block just like we used to in the beginning. We are just like the guys next door and we never considered ourselves stars or celebrities. We are easily approachable and we love doing festivals like “Paid Dues” because it allows us to connect with the people and see other groups that we like. We are still fans of the music.