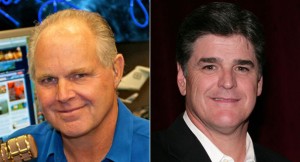 This is GREAT news. The radio industry is derailing two blabbermouths who spread their vitriol daily for ratings no matter who it upsets. Sources state Cumulus could not reach a contract agreement with Premiere over the value of the Rush Limbaugh and Sean Hannity's shows. Limbaugh's consistent loss of advertisers over his Sandra Fluke attack, where he called her a prostitute, amongst other things have helped to make his show lose millions in ad revenue. Limbaugh was also outrageously critical of the Obama administration during the first term in and endless effort to ensure there was not a second term for the first black president. Oh well! Let's all hope both shows are cancelled permanently.  Source Politico

Did DJ Khalid's Proposal to Nicki Minaj Encourage her to Beef up Security?