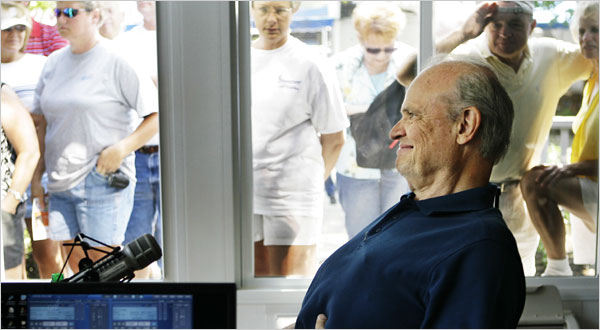 Amid all the pressures on the radio industry, news-talk Radio Station s see an opportunity “ and his name is Barack Obama. Skip to next paragraph Enlarge This Image Ruby Washington/The New York Times Rudolph Giuliani is also a potential host. After eight years of playing defense for President Bush, the conservatives who dominate talk radio are back on offense. Hours after Mr. Obamaâ„¢s election, the countryâ„¢s most popular radio host, Rush Limbaugh, was talking about the Å“rebirth of principled opposition.  Sean Hannity, the second highest-rated host, quickly cast his afternoon show as the home of Å“conservatism in exile.  It is a lively time to be behind the microphone. One television talker, Joe Scarborough, is starting a radio show. Another, Bill Oâ„¢Reilly, is ending his. Several of the supporting actors in this yearâ„¢s Republican primary are showing interest in the medium, too. Fred Thompson, the Å“Law & Order  star turned presidential cand idate, will begin hosting a two-hour show in March, as the syndicator Westwood One is expected to announce this week. Mr. Thompsonâ„¢s show would take the place of Mr. Oâ„¢Reillyâ„¢s. Rudolph W. Giuliani, the former mayor of New York City and a Republican presidential cand idate, had been in negotiations with Westwood One for Mr. Oâ„¢Reillyâ„¢s time slot, according to two people with knowledge of the talks who spoke on the condition of anonymity because a deal was not struck. Mike Huckabee, the former Republican presidential cand idate who now has a weekend program on the Fox News Channel, is trying radio as well, hosting short segments for ABC Radio beginning Jan. 5. While there are plenty of topics to talk about “ and plenty of hosts willing to do the talking “ nagging questions about the business remain. A sharp advertising downturn is limiting revenue for Radio Station s. And some hosts are worrying about the relevance of talk radio in a digital age. But radio, at least for now, still acts as a national megaphone for influential voices. This year, news talk ranked as the most popular radio format in the United States, surpassing country music for the first time ever. Forty Radio Station s have added news talk in the last year, for a total of 2,064 that use the format, up from about 1,500 a decade ago, according to the trade publication M Street. That means 2,064 Radio Station s need 24 hours of programming every day. Stations with tight budgets increasingly rely on programs from Premiere Radio Networks, ABC Radio Networks and other syndication companies. Five of the most popular syndicated names in news-talk radio “ Mr. Limbaugh, Mr. Hannity, Glenn Beck, Michael Savage and Laura Ingraham “ signed new contracts in the last 12 months, all but guaranteeing that they will be rallying listeners for the duration of Mr. Obamaâ„¢s four-year term. Mr. Limbaughâ„¢s land mark contract, announced in July, promised a total of $400 million through 2016. With a Democrat in the White House, Å“the conservative hosts will have more fun. Thereâ„¢s no doubt about that,  said Gary Schonfeld, the president of network programming for Westwood One. But will listeners stay tuned? Talk radio usually Å“becomes a little less popular the year after an election,  said Maja Mijatovic, the vice president and director of national radio for the media buying agency Horizon Media. However, next year promises to be a unique one, with grim forecasts about the economy and renewed interest in the presidency. Advertisers and syndicators are expecting a busy year because of the incoming administration. Å“I think people are going to tune in more than ever,  Ms. Mijatovic said. Premiere Radio, a subsidiary of Clear Channel Communications, is projecting a consistent audience from 2008 to 2009 as it signs on advertisers. Å“Thereâ„¢s more to talk about than there has been in a hundred years,  Charlie Rahilly, the president of Premiere, said. Å“There is something almost historical in nature in the news every single day.  Mr. Limbaugh, who is syndicated by Premiere, continues to command a much larger audience than any other radio host. According to Arbitronâ„¢s spring 2008 ratings report, he reached 3.58 million listeners during an average quarter-hour, while the No. 2 host, Mr. Hannity, averaged 1.65 million. A middle tier of radio hosts helps fill the schedules of AM and FM Radio Station s. Å“Because you donâ„¢t have a commodity like music to rely upon, it is all up to the host,  said Carl Anderson, the senior vice president for programming and distribution at ABC Radio Networks. Å“They are on stage by themselves.  The talk-radio formula that Mr. Limbaugh pioneered two decades ago remains evident on the air today. Syndicators look for hosts who are entertaining, have a point of view and , as Mr. Anderson put it, show an ability to Å“connect with an audience.  [source]