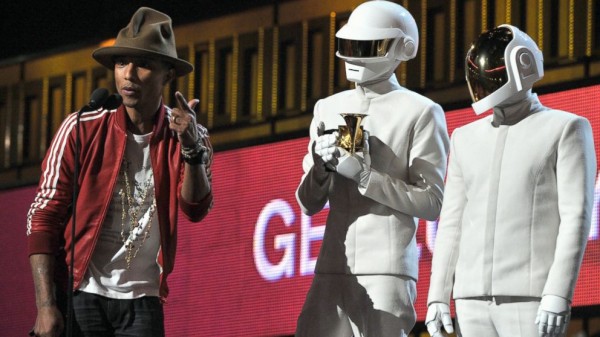 Columbia Records congratulates its artists Daft Punk, Pharrell Williams, Adele and The Civil Wars for their 56th Annual GRAMMY® Award wins, announced January 26, 2014 from the Staples Center in Los Angeles.2013 was truly the year of Daft Punk. The French duo was honored with five GRAMMY® Awards including “Record of the Year” (“Get Lucky” ft. Pharrell Williams) and “Album of the Year.” Viewers who tuned into the live ceremony witnessed the once-in-a-lifetime collaborative performance by Daft Punk, Pharrell Williams, Nile Rodgers and Stevie Wonder. Daft Punk and “Random Access Memories” took home honors in all five nominated categories:Album of the Year (“Random Access Memories”)Record of the Year (“Get Lucky” ft. Pharrell Williams)Best Pop Duo/Group Performance (“Get Lucky” ft. Pharrell Williams)Best Dance/Electronica Album (“Random Access Memories”)Best Engineered Album, Non ClassicalAdele took home her tenth GRAMMY® Award on Sunday for “Best Song Written For Visual Media” (“Skyfall”).The country duo, The Civil Wars, was awarded their fourth GRAMMY® for “Best Duo/Group Performance” (“From This Valley”).GRAMMY® Award-winning singer/songwriter/producer Pharrell Williams was honored with “Producer of the Year” as well as “Album of the Year,” “Record of the Year,” and “Best Pop Duo/Group Performance” for his collaborations with Daft Punk on “Random Access Memories.”In addition to Columbia Records’ GRAMMY® winners, several columbia records artists took the stage on Sunday for electrifying performances. Beyonce teamed up with husband and rapper Jay-Z for the debut performance of their new hit, “Drunk in Love,” featured on the singer’s unprecedented and groundbreaking new album, “BEYONCE.” John Legend serenaded the audience and viewers at home with his moving performance of his biggest hit ever “All of Me,” which immediately catapulted to #3 on the iTunes Top Songs chart and marked the most explosive jump of the night on the chart. Juicy J took the stage with Katy Perry for a haunting performance of their chart-topping hit “Dark Horse.” Nine Inch Nails graced the GRAMMY® stage for the first time and joined forces with Queens Of The Stone Age, Dave Grohl and Lindsey Buckingham for the telecast finale.