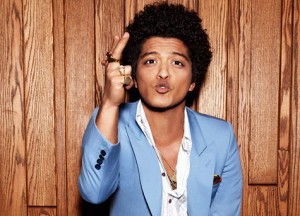 Grammy Award winning singer/songwriter/producer Bruno Mars has announced a tour called “The Moonshine Jungle World Tour” which will support his sophomore album “Unorthodox Jukebox” album which was released late last year.The multi-ethnic, multi-genre musical artist (R&B, reggae, etc.), birth name Peter Gene Hernandez, is of partial Jewish heritage, and will hit the road commencing this summer in North America, and will thusly travel throughout Europe. Dates and venues are yet to be officially announced, but word has it he will bring his show to Atlanta, Chicago, Dallas, Las Vegas, Los Angeles, Miami, New York, Washington D.C., and more.The artist’s career picked up steam when his relationship with Motown expired, and he took up with Atlantic Records in 2009. Mars’ most recent previous tour spanned from 2010 to 2012. Current tour was announced on The Ellen DeGeneres Show this week.Mars has won all eight of the ASCAP Awards he’s been nominated for. He is most recently a nominee in the Best Rap Song category for the 55th Annual Grammy Awards held last week.