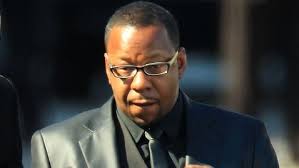 Every Little Step Bobby Brown takes for the next 55 days will be around a jail facility. Bobby Brown turned himself in to authorities to start serving his sentence for a driving under the influence conviction. Brown’s attorney and a spokesman for the city attorney’s office confirmed the New Edition stand out turned himself in at a Los Angeles courthouse Wednesday.Bobby pleaded no contest to DUI and driving on a suspended license in February. He will also be required to serve four years on informal probation and complete an 18-month alcohol treatment program, which is standard for a second DUI conviction in California. The conviction is Brown’s second for DUI in less than a year.