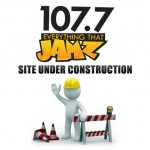 The Radio Station , formerly known as Kiss 107.7, is now 107.7 JAMZ. The Beasley Broadcast Group has introduced the new urban format after the Radio Station ‘s repeated previous lackluster performance in the Fayetteville market. Station management has replaced its previous UAC programming with more of an urban adult hits format known as “Everything That JAMZ!”
“Obviously, that would get our attention a little bit,” said Mac Edwards, market manager for Beasley’s six Radio Station s in town. “But more, we’ve been talking with our audience. We’ve been getting feedback from them. They said they liked more energy on the Radio Station . They like to consider themselves younger.
The new format targets men and women, ages 25 to 54, with a blend of rhythm-and -blues, funk and early hip-hop from the 1970s to today’s hits, according to Beasley.   The Radio Station ‘s website is under construction. (click to listen here)