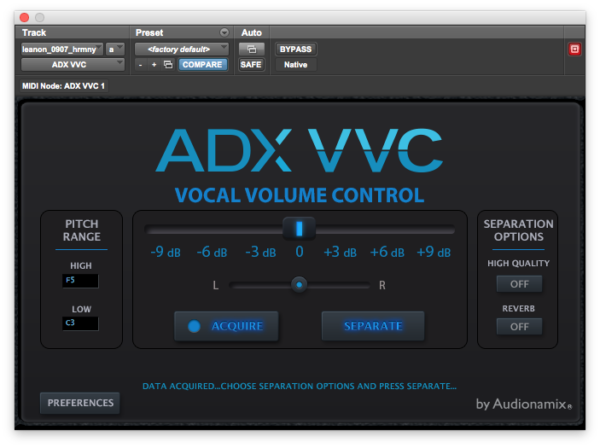 Audionamix, the industry leader in audio source separation is extending its reach with the latest updates to their popular product line, which are scheduled for release at the 139th AES Convention in New York. The new ADX Vocal Volume Control plug-in (ADX VVC) version 2.0 adds compatibility with Windows operating systems and support for VST and Audio Units formats. ADX TRAX and ADX TRAX Pro 2.5 include a convenient ‘import MIDI as a pitch guide’ feature and overall stability improvements. In addition to these highly anticipated updates, Audionamix will introduce DJ Voxchanger the world’s first iOS app that can separate and transform vocals within any song.
The groundbreaking ADX Vocal Volume Control plug-in stands alone as the only plug-in that allows the user to adjust the volume and pan position of melodic content within a locked mix, without affecting its accompanying music track. The ADX VVC 2.0 update includes a new consonants boost algorithm, significant speed and accuracy improvements. Compatibility with Windows and OSX together with added support for VST, Audio Units and AAX 32-bit formats, makes VVC 2.0 available to use in the most popular DAWs.
Audionamix will also release the highly anticipated MIDI import feature for their award winning ADX TRAX product line. A MIDI file imported by the user will be quickly converted into a marquee-style pitch guide that surrounds any targeted melody for a quicker initial separation. This exciting new feature, along with overall stability improvements will save valuable time when separating elements for a new production!
Entering into the mobile market, Audionamix will also showcase DJ Voxchanger, the first Vocal Transformation app of its kind to hit the iOS market. DJ Voxchanger offers tech lovers, music hobbyists and fans, the ability to separate the lead vocal within any song and transform its age, gender and overall vocal characteristics. The result can be shared with friends and exported to various social platforms.
Make sure to stop by the Audionamix Booth #554 or the Avid Partner Pavilion at AES NY to demo ADX products and to see DJ Voxchanger in action!
ADX VVC 2.0 Highlights and Pricing:
Windows compatibility
AAX, VST and AU plug-in formats
Significant speed enhancements
New Consonants Boost algorithm
Free upgrade for all current owners
Buy ADX VVC 2.0 ($249) or rent for $7.99/wk
ADX TRAX 2.5 & ADX TRAX Pro 2.5 Highlights and Pricing:
New ‘import MIDI as a pitch guide’ feature
Free upgrade for all current owners and subscribers
Buy ADX TRAX 2.5 ($299) and TRAX Pro 2.5 ($499)