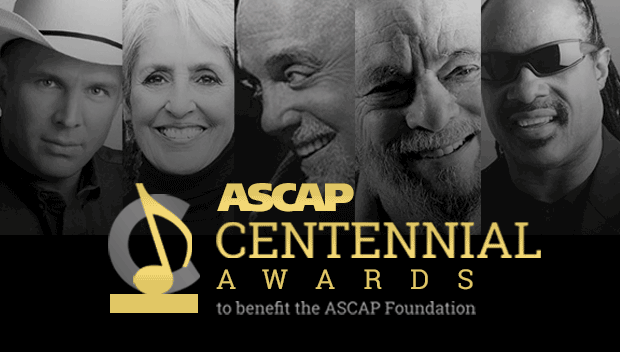 ascap President & Chairman Paul Williams announced that ascap (American Society of Composers, Authors and Publishers) will confer its singular, once-in-a-century ascap Centennial Awards, to a select group of American music icons in recognition of their incomparable accomplishments in their respective music genres and beyond. Those confirmed to receive this prestigious accolade are ascap members Joan Baez, Garth Brooks, Billy Joel, Stephen Sondheim and Stevie Wonder.The unique presentations will take place on Monday evening, November 17th, at the Waldorf Astoria Hotel, in New York, at a gala party celebrating ASCAP’s historic 100th anniversary. The event will be hosted by Williams and feature the Centennial Award recipients as well as the special guest artists who will perform in tribute to the honorees. In addition, several young ascap Foundation award recipients will be on hand to showcase their talent.The event also marks the first-ever fundraiser benefiting The ascap Foundation and its music education, talent development and humanitarian activities. The ascap Foundation, which Paul Williams also serves as President, was established in 1975 and is a 501(c)(3) charitable organization whose programs impact countless deserving composers, songwriters, lyricists and music education organizations nationwide. Funds raised from this evening will help sustain the Foundation’s significant efforts in safeguarding the future of music and affording opportunities for memorable music experiences to the disadvantaged.”Each of our ascap Centennial Award recipients is in a class of his or her own, as the creator and performer of songs that have touched the lives of people across the globe. It’s wonderful to be able to salute them on the occasion of ASCAP’s Centennial year and, as important, to raise funds to perpetuate the important work being done by The ascap Foundation,” said Paul Williams.