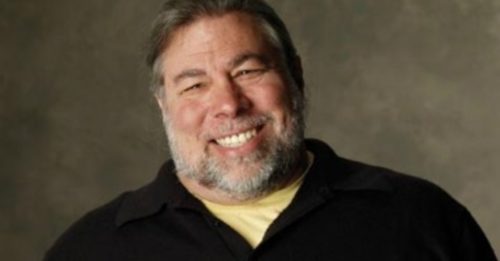 TREVOSE, PA – January 6. 2015 – Apple co-founder Steve Wozniak advised an overflowing crowd at ASI Show® Orlando to seek original ideas if they want to be successful beyond their wildest dreams.

“Eventually, you could create software that could change the world,” said Wozniak, an engineer who single-handedly kick-started the personal computer revolution and founded Apple in 1976 with marketing legend Steve Jobs. Wozniak’s keynote on Tuesday was a highlight of ASI Show Orlando, hosted by the Advertising Specialty Institute® (ASI). The trade show attracted 745 exhibitors and 6,084 attendees from 49 states and 22 countries, with distributor attendance up 8% over 2014. All told, a record 27 companies chose Orlando to host their sales meetings, an increase of 35% from the previous show.

Wozniak’s spirited Q&A with ASI president and chief executive officer Timothy M. Andrews drew an audience of over 1,000. “The Woz” covered Apple’s early years and shared insider tales about Jobs along with predictions for the future of technology, like tech items and accessories that will soon operate solely at the direction of people’s voices. “Now, you see people speaking into their phone like it’s their friend,” said the jovial, energetic Wozniak. “I like that we can speak to computers in a human way. Maybe we won’t make machines conscious. If we do, I really hope they take good care of us.”

The self-professed geek, who appeared on the reality show Dancing with the Stars and in an episode of The Big Bang Theory despite never watching TV himself, said he appreciated innovation in whatever form. “I love promotional products,” he said, calling out a branded thermos one of his companies gave to employees that miraculously kept beverages hot for two days. “It’s a great way to get the word out.”

After the Q&A, Wozniak toured the show floor, surprising attendees and happily posing for photos and gathering samples. Kristen Beck, of Alligator Events in Sebastian, FL, thanked Wozniak, a former teacher, for his inspiring words about the importance of education. “He was awesome,” she said. “It surpassed my expectations.”

Cliff Quicksell, of iPROMOTEu (asi/232119), called the keynote empowering. “For me, it was really nice to hear someone say how important creativity is in the workplace,” he said. “It was just inspiring.”

“From every account, ASI Show Orlando exceeded everyone’s expectations,” said Rita Ugianskis-Fishman, vice president and general manager of ASI Show. “Attendance was up, and there was a terrific buzz and energy you could feel in every aisle and at every meeting. Suppliers are telling us that because of our quality and quantity they are choosing to launch the new selling year and showcase the latest products at Orlando.”

“Ariel enjoys a 0.4% internal error rate – which means this $30 million company is near perfect when it comes to pricing, sourcing, personalizing, decorating, packing and shipping,” said Andrews. “They believe in hiring the best, and consider their talented staff one big diverse family – one that’s dedicated to customers and to giving back to their community.”

ASI Show introduced several new features at Orlando, including the “Marketplace!” to showcase products from five of the most popular money-making industries – health care, financial services, education, technology and construction/manufacturing. During ASI’s “Minute to Win It” game show, participants competed for fun prizes. Distributors and suppliers also came together at new Networking Clubs, focused on shared interests like adventure, dining, good spirits, and health and wellness. Finally, attendees took a break from activities in the new Social Lounge, featuring a live feed of show photos tagged with #ASIOrlando.

Suppliers told ASI they loved the show. “We’ve been incredibly busy – high traffic of excellently informed customers – so it gives us a great starting point when they come into the booth,” said Klint Battien, of SanMar (asi/84863). “We keep coming back year after year because it’s a really great time for our customers to see new styles and start the year off right.”

Distributor Charles Anderson, of Acosta Sales and Marketing Promo Depot (asi/104418), brought over 20 people to ASI Show Orlando. “With the vast number of vendors here, we know we can source all of the items that we need and that are requested from us each and every day,” he said. “This is such a diverse show with so many areas of promotional merchandise – from apparel to promotional products to incentives.”

“We couldn’t be happier with ASI Show Orlando,” said Andrews. “We delivered a hundred new suppliers along with compelling education to help distributors grow their companies and advance in the industry.”

For complete coverage of the show, including blogs and videos, visit www.asicentral.com.

About the ASI Show