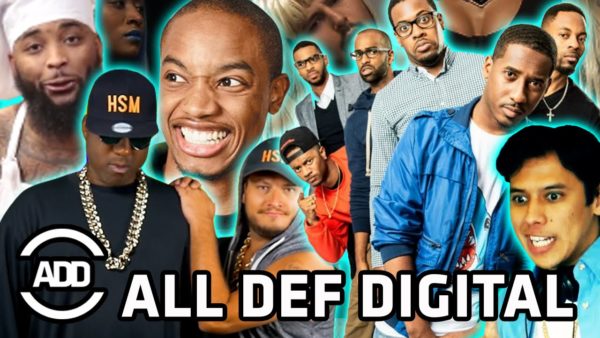 ALL DEF DIGITAL has crossed one million subscribers on its direct channel on YouTube, one of the company’s primary digital outlets. The announcement was made today by Chief Executive Officer, Sanjay Sharma.
“We tripled our subscriber base in less than a year and are driving industry leading retention rates and engagement,” said Sharma. “Our audience and programming expertise – from highly shareable cross-platform social video, to live comedy and music experiences, to a compelling slate of premium television product – is simply unmatched among traditional media brands and digitally native destinations. Our team and network talent, armed with tremendous data and audience insights, connect with a new generation of hip hop music millenials better than anyone.”
The company has been moving aggressively into premium long-form content, recently entering into a first-look deal with hbo for television. hbo announced several ADD projects as part of the network’s Television Critics Association press day, including All Def Comedy Live, a stand up comedy series based on ADD’s wildly successful weekly live comedy event in Hollywood.
“The explosive growth of ADD indicates that the network has clearly struck a chord with urban audiences across YouTube,” said Robert Kyncl, Chief Business Officer, YouTube. “This marks a major milestone for any media company on the platform.”
ADD’s digital comedic programming has grown to include shareable social video with consistent virality across social video platforms, professionally produced sketch comedy, and episodic web series, both from its in-house team and network talent partners. The network recently launched “Two Minute Drill,” a weekly sports show, and “The Firing squADD,” a biting political commentary series. The company’s music vertical is growing as well. “Arts and Raps” is an unconventional hip hop music interview show where kids do arts and crafts with hip hop music artists. ADD’s weekly artist discovery series “The Signal” was recently featured in the “YouTube for Artists” documentary alongside VICE, which recognized ADD’s initiatives to help artists break online.
“I’m so excited by what our team at All Def has accomplished in reaching our first million subscribers,” said ADD co-founder Russell Simmons. “I am inspired coming to work every day with some of the most talented professionals from across digital and social video, standup comedy, spoken word, music, television and film. We’re just getting started.”

VH1 Save The Music, Toyota, and Santigold Help to Bring Music Education back to New Orleans School