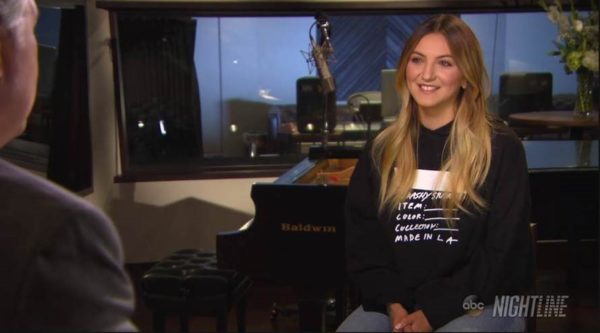 JULIA MICHAELS quickly cemented herself as the biggest global breakthrough artist of 2017 with the release of her multiplatinum-selling debut single, “Issues.”

With worldwide consumption approaching 7 million, “Issues” is the best-selling song by a new artist released in 2017, according to Nielsen Music. It is also the highest on-demand audio streaming song by a debut artist this year. As a songwriter, she has co-written seventeen titles that have charted on the Billboard Hot 100, eleven of which have hit the Top 40, including “Issues.”“Issues” reached #4 on both the iTunes US Top 200 Songs Chart and US Top Pop Songs Chart, and is the first song to reach the Top 5 at Top 40 radio by a debut artist with a 2017 release. “Issues” went Top 10 on iTunes in over 50 markets worldwide, and has been certified 3x platinum in Sweden, 2x platinum in the U.S., Norway, Australia, and Canada, and certified platinum in the UK, Belgium, Netherlands, Italy and Gold in Spain, France, Denmark, Brazil and Germany. This Summer, Michaels’ released NERVOUS SYSTEM, her self-professed debut “mini-album.” Upon its release, the seven-song set soared to #2 on iTunes’ US Top Pop Albums Chart.Her work continues to garner widespread recognition. During 2017 alone, she garnered award nods at the American Music Awards (New Artist Of The Year), MTV VMAS (Best New Artist), Billboard Music Awards (Top Covered Artist), Teen Choice Awards (Choice Song: Female and Choice Breakout Artist), and more. Michaels remains an in-demand collaborator, she is currently featured on Maroon 5’s new album on a song called “Help Me Out,” and will be featured on Clean Bandit’s upcoming single “I Miss You,” both songs she also co-wrote. Moreover, she’s a powerful presence on stage, set to join both Shawn Mendes and Niall Horan for upcoming dates on their worldwide tours.Prior to making her debut as a solo artist, JULIA MICHAELS became one of pop music’s most in-demand songwriters, co-writing a string of Billboard Hot 100 hits alongside Justin Tranter including smashes like Justin Bieber’s “Sorry,” Nick Jonas ft. Tove Lo “Close,” Selena Gomez’s “Good for You” [feat. A$AP Rocky] & “Hands To Myself,” Hailee Steinfeld “Love Myself,” Britney Spears “Slumber Party,” Gwen Stefani’s “Used To Love You,” and Linkin Park’s “Heavy.” Recently released works include Selena Gomez’s “Bad Liar,” Ed Sheeran’s “Dive,” John Legend’s “Surefire,” Justin Bieber & BloodPop®’s “Friends,” with new titles on Jessie Ware and P!nk’s newly released albums. The cumulative worldwide stream count for songs MICHAELS has co-written exceeds 10 billion to date.

Vet Steve Kerrigan is having to take a break from his air shift to take care of himself and family. A note posted on the Radio Station ‘s website follows, we wish Steve well:He has multiple myeloma, a rare form of blood cancer that has no cure right now. After chemo and a stem cell transplant in November 2008, he quickly went into remission and enjoyed good health for nearly a year. In February of this year, he came out of remission and has been waging the war again. Steve has been doing a lot of “soul searching” lately. After Friday’s show, we taped an interview that aired this morning where he announced, “I just wanted to tell the folks that I’m not going to be here for the foreseeable future. I’m going to take some time off for health reasons to take care of myself. I hate cancer. It’s an ugly thing, and unfortunately, it’s touched another member of my family as well. I want to be there for them. Thanks for your support and I hope to talk with you all very soon!” You can leave a message for Kerrigan right here or on our Facebook page. You can also send him an email at [email protected] or a card to 1414 Wilmington Avenue, Dayton, 45420. Check out Kerrigan’s favorite song!