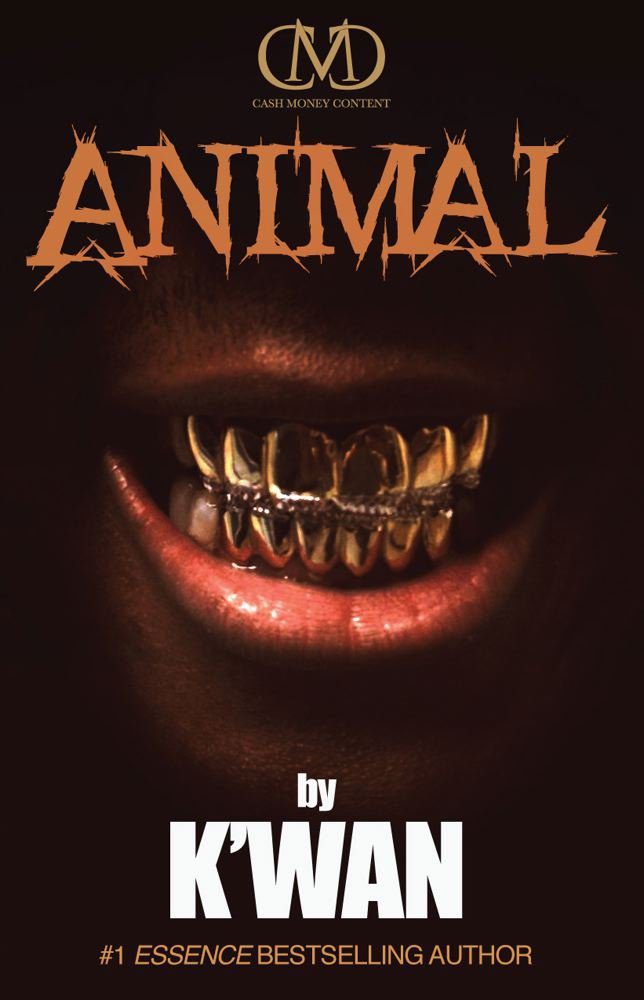 A complex and bloody tale from one of this generation’s most talented and gritty writers, the story follows Animal, the infamous fugitive from K’wan’s well”‘known Hood Rat Series, on a tragic trail of revenge. The novel takes the reader through the rugged streets of Puerto Rico to the scene of the original crime, Harlem , NY , following the footsteps of a ruthless murderer.

Animal survived both unfathomable abuse from his family and the unforgiving streets, but stilled learned to love. Infamous for turning at any moment into a cold-blooded killer, Animal is the product of the world we all live in. There but for the grace of God go . . . any of us.

When pushed to the limit” is there an ANIMAL is all of us? Is there something that could push you to the breaking point of murder? Are you absolutely sure there isn’t? ANIMAL, the first novel from K’wan to follow, Animal, his fan’s favorite character, is in stores October 2nd, and is a highly anticipated release.

– Entertainment Weekly on “Street Dreams””The big draw here is the electric prose, which is imbued with profane, comic lyricism.”- Publishers Weekly on “Hood Rat””K’wan has risen from “just another street lit author” to a writer who produces thrilling plots, and his descriptive prose holds its own against many top-selling authors.

In 2008, he won Black Press’ Author of the Year. Through strategic street marketing and independent author campaigns, K’WAN, a New York native, has been unmatched in promoting his novels. He has built a strong hardcore fan base in the New York Tri”‘state area that captures both male and female readers alike.

K’wan has been featured in Vibe, Pages, King, Felon, Big News, The Library Journal, Entertainment Weekly, The New York Press, Clutch and most notably Time Magazine, https://www.time.com /time/magazine/article/0,9171,1543951,00.html. He was also interviewed by MTV News for a feature on Hip”‘Hop fiction, NY’s Power 105 and NPR.

More about ANIMAL “One bullet changed everything.” Three years after narrowly escaping a one way trip to the gas chamber, the fugitive known only as Animal finds himself drawn back to the scene of the crime, Harlem , NY . Throughout his entire time in exile the only thing that kept Animal going was the thought that he would one day be reunited with his soul mate, Gucci.

But one bullet changed everything. When his enemies tried to murder Gucci they crossed the line, so he vowed to cross them all.While Gucci teeters between life and death Animal sets out on a bloody mission fueled by love and orchestrated by bullets…there would be no more innocents.

Alliances are formed and secrets uncovered while Animal wages his personal war on the streets of Harlem only to discover one great truth….he is but a small piece in a much greater puzzle.

For more info log onto www.kwanfoye.com. Follow K’wan on twitter @K’Wan141 or @We_R_TeamAnimal and also find him at facebook.com/We Are #TeamAnimal.CMC Young Author’s Draft Competition Attention all College Students! Ready your manuscript!

The contest is open to current students at accredited colleges, universities or trade schools only. Log onto facebook.com/cashmoneycontent for further details. The deadline has been extended to November 30, 2012.

5 Inside Reasons Why Radio Sucks

Anita Baker Soars to the Top of the Urban AC Charts...

Anthony Hamilton “Pray For Me” Number 2 & Climbing on the...

Apparently R Kelly Isn’t the Only One “Feelin’ Single” Based on...

AskMen’s Most Desirable Woman Winners for 2012